Which character from the Jane Colt trilogy are you?

Take the Myers-Briggs test (click here) to find out what your personality type is, then look at the chart below to find out which character from the Jane Colt trilogy you are. Character descriptions below the image. 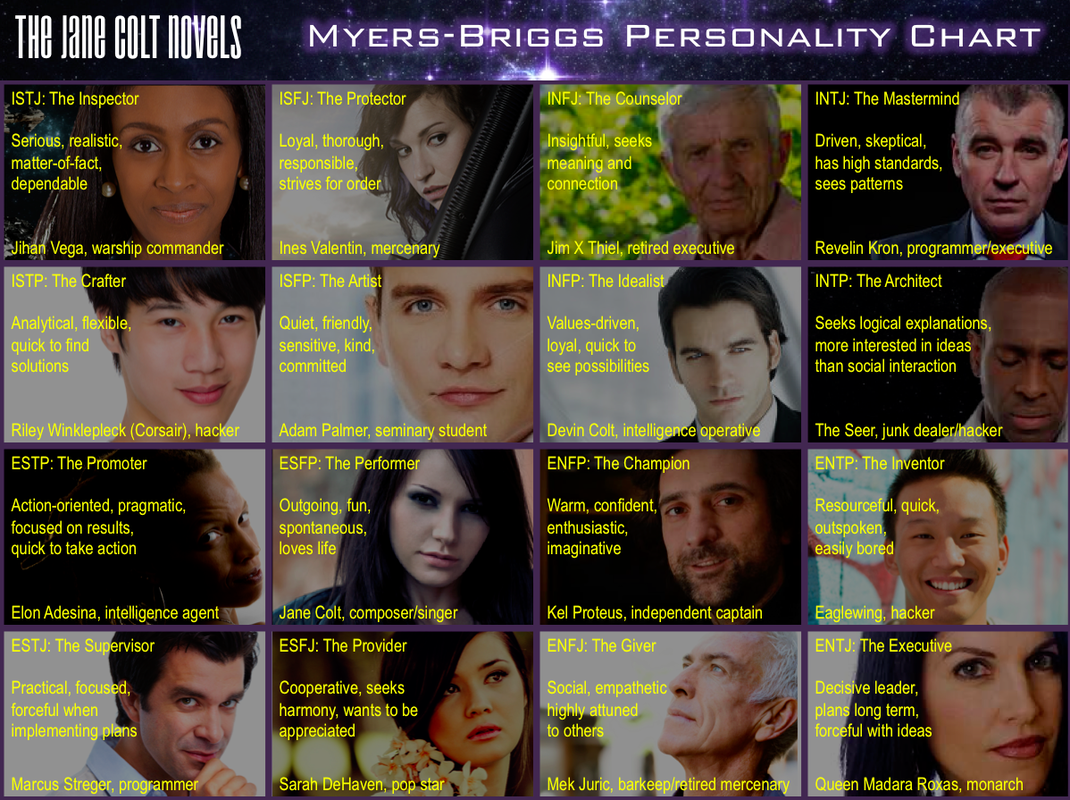 ISTJ - Commander Jihan Vega
Appears in Artificial Absolutes (Jane Colt #1)
Commander Vega is at the helm of a powerful warship called the Granite Flame. A stern believer in upholding the law with a no-nonsense demeanor, she abhors waste and inefficiency. However, there is nothing she hates more than collateral damage, and she's been known to bend the rules if the law comes into conflict with her own moral code.


ISFJ - Ines Valentin
Appears in Synthetic Illusions (Jane Colt #2) and Virtual Shadows (Jane Colt #3)
Usually identified only as "the woman with the silver armbands" or some variation of that, Ines keeps her true name and identity a closely guarded secret. She is a member of Tenebrarum, an order of mercenaries with a code of honor. Though she's highly skilled and lethal, Ines only uses her talents to take down the wicked.


INFJ - Jim X. Thiel
Appears in Artificial Absolutes (Jane Colt #1) and Synthetic Illusions (Jane Colt #2)
Once the owner of the galaxy's biggest tech conglomerate, Jim X has mellowed out in his older years. No longer ruthlessly ambitious, he often regrets having spent most of his life in pursuit of a shallow definition of success. He now greets the world with an open mind and does his best to understand others.


INTJ - Dr. Revelin Kron
Appears in Artificial Absolutes (Jane Colt #1)
An ambitious genius, Kron uses his considerable programming talents to serve a powerful tech corporation. Since his mind works too quickly for most to keep up with, he constantly seeks new challenges with little thought given to the cost or consequences. He oversees many of the company's programming operations in his role as an executive, and his successes have made him rather arrogant.


ISTP - Riley Winklepleck (Corsair)
Appears in all three Jane Colt novels
Riley, who goes by "Corsair" online, considers himself one of the best programmers in the galaxy, if not the best. However, he doesn't trust establishments or governments and uses his hacking talents to push his social justice ideals. Intensely loyal to his friends, Riley loves swooping in to save the day with his super skills.


ISFP - Adam Palmer
Appears in all three Jane Colt novels
Mild-mannered and somewhat shy, Adam's only ambition in life is to help others. He spends his days studying the peaceful tenets of the Via religion, seeking enlightenment and hoping to use what he learns to spread the Absolute's wisdom. Though he'll stand up for what he believes in, he dislikes conflict and would never force his values or ideas upon others.


INFP - Devin Colt
Appears in all three Jane Colt novels
Devin once dreamed of fighting for the oppressed, but the dangers he faced in his teenage and university years left him too tormented by his mistakes to pursue his causes in his twenties. Instead, he opted to follow his father's footsteps in the corporate world, hoping the safe route would keep the past from coming back to haunt him. But he remains an idealist at heart and won't hesitate to take action when needed.


INTP - The Seer
Appears in all three Jane Colt novels
The Seer seeks rational explanations to everything. He is an enigmatic figure online who takes the world literally and often appears to be as analytical as the computers he hacks. Though social interaction makes him uncomfortable, he values human life. He abandoned his life as a corporate programmer in exchange for freedom and independence, and he makes a living as a junk dealer.


ESTP - Agent Elon Adesina
Appears in Synthetic Illusions (Jane Colt #2) and Virtual Shadows (Jane Colt #3)
Agent Adesina is something of a rogue within the Intelligence and Security Agency of the Republic of Kydera, but her willingness to flout the rules garners results. She cares deeply about her missions and teammates, and she has no patience for bureaucratic red tape. At the end of the day, she's the one who gets things done.


ESFP - Jane Colt
Appears in all three Jane Colt novels
Jane dreams of becoming a famous composer, but her insecurities led her to join her father's company after university instead of pursuing music. But when she finds herself in trouble, she'll face her fears and do whatever it takes to protect those she cares about. Impulsive and brazen, she often finds herself acting before she thinks.


ENFP - Captain Kelvin "Kel" Proteus
Appears in Synthetic Illusions (Jane Colt #2)
Kel is the captain of one of the few independent transports left; most others have been edged out or absorbed by large corporations. Though he knows he's something of a fool, he nevertheless holds on to his independence in the face of hardship and takes pride in his scrappy operation.


ENTP - Eaglewing
Appears in Artificial Absolutes (Jane Colt #1) and Synthetic Illusions (Jane Colt #2)
Eaglewing uses his smarts to get up to no good. He hires out his hacking skills to whoever will pay, and he has no qualms about breaking the law. He also enjoys using his coding talents to troll the Net for kicks - and show off to pretty girls.


ESTJ - Marcus Streger
Appears in Synthetic Illusions (Jane Colt #2)
Incredibly adept at programming - and most things he put his mind to - Marcus started his own online company at a young age and was eventually able to compete with the big corporations. However, his lack of success in his personal life left him bitter at the universe. Focused and hard-working, he'll stop at nothing to get what he wants.


ESFJ - Sarah DeHaven
Appears in all three Jane Colt novels
Renowned for her delicate beauty, Sarah has the adoration of fans across the galaxy. Nevertheless, she seeks approval from everyone around her and does her best to be liked by each person she meets. She genuinely loves music and hopes to make the universe a better place, both through art and through charity.


ENFJ - Mekaisto "Mek" Juric
Appears in Synthetic Illusions (Jane Colt #2) and Virtual Shadows (Jane Colt #3)
Mek was once a deadly mercenary, but, having retired some years ago, now spends his day managing a bar frequented by mercs and those seeking to hire them. Perceptive and insightful, Mek is intensely curious about the people who pass through his establishment and isn't above nosing into their business. However, he knows better than to interfere once his curiosity is satisfied.


ENTJ - Queen Madara Roxas (The Tempest Queen)
Appears in Virtual Shadows (Jane Colt #3)
A ruthless monarch, Madara has made "the Tempest Queen" one of the most feared names on the Fringe. She uses her position of power to weave complex, long-term plans, patiently biding her time until the right moment to strike.
Back to Jane Colt Home